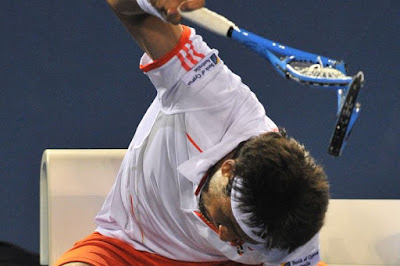 Choosing the right racket can be a daunting experience. With the wide variety of rackets on the market and the potential of the wrong racket negatively affecting your game--not to mention your wallet--it is important to understand the variables that comprise the modern racket.

The main thing to consider in choosing a racket is whether you are looking for power or control.
Players new to the game of tennis generally need a lighter racket that can add more power to their swing. Power rackets are lightweight (8-10 ounces) and feature oversized heads (100-130 square inches); they're generally longer and head-heavy to supply that extra torque in the swing. The power racket is also loosely strung for more power, and the oversized head offers a large "sweet spot" for maximum return on the ball. The trade-off is a lesser degree of ball control. The power racket is suitable for players more concerned with adequately getting the ball over the net, rather than with the nuances of advanced tennis like spin and placement.
Control rackets, on the other hand, are all about ball control. These rackets are for advanced players who can supply their own power to their swing, and prefer a racket that offers more control over ball placement and spin. Control rackets are heavier (11-15 ounces), and feature a smaller, lighter head for maximum maneuverability. Control rackets are tightly strung with thinner beams for further ball control.

The idea is to find the proper balance between power and control. This is where the large selection of rackets on the market comes into your favor. Any combination of these variables can be found to best suit your playing ability and desired improvement.
Head size
Probably the most influential racket variable is the size of the head. Larger head sizes create higher speeds of ball rebound and have a larger sweet spot--the area on the racket face where the ball rebound is the fastest and most accurate. A large racket head also dramatically increases the racket's resistance to twisting in off-center impacts. Modern rackets range between 85-135, with around 100 being the most common.
Frame width
Another key design variation is the width of the racket frame. Increases in the width of the frame increase its stiffness and eventually the speed of ball rebound, since not as much energy is spent bending the racket. The cost of such increases is the transmission of a greater impact shock to the arm.
Frame mass
Modern tennis rackets have been getting lighter and lighter. However, greater racket mass is directly proportional to greater speed on a ball, if all other variables remain equal. Greater mass means more power, given that the player can provide the powerful swing. Novice players tend to agree more with a lighter racket that allows them to swing it faster.
The other advantage of a racket with more mass is that this mass helps protect the player's arm by being more resistant to the acceleration of impact. For example, very light rackets are great for the fast movements of a serve-and-volley player, but provide less protection to the arm during the shock of impact. An increase in racket mass may help protect the arm or to mechanically discourage a tendency to swing wildly at shots.
Head-heavy vs. head-light
Lightweight, head-heavy rackets are a good combination for the novice and intermediate player. The concept behind these rackets is to offer a light racket with more weight at the point of impact. Ideally, these rackets can be swung faster while still maintaing weight at the hoop for increased power and control.
More experienced players prefer the heavier, head-light rackets, considered to be the traditionally weighted racket. They offer more control for players who can supply their own power.
Grip size
The most important aspect of grip size is the ratio of comfort to wrist stress. A grip that is too small will be maneuverable, but will cause the muscles of the forearm and hand to work very hard to grip the racket. Larger grips are easier on the gripping muscles, but the hand/wrist will be less mobile.
For example, players with tennis elbow problems might switch to a larger grip to decrease demands on the muscles and increase leverage to resist off-center impacts. A general rule for grip selection is to hold the racket in the forehand position, you should then be able to place your index finger between the area on the grip where your fingertips end and your palm begins.
String pattern
An open string pattern has an increased gap between strings for better grip when applying spin on the ball. A dense string pattern offers more control of the ball, but requires more power for applying spin.
Article from Active.com
Posted by mark at 1:45 PM

Email ThisBlogThis!Share to TwitterShare to FacebookShare to Pinterest
Labels: Tennis tip of the Month!

Get your Gift Certificate Now!

Brought to you by 3rdToad.com Tennis

Check out the newest Head rackets!

To search my site use the search field - upper left corner.